What Is The Difference Between Broadband And WiFi

What Is The Difference Between Broadband And WiFi 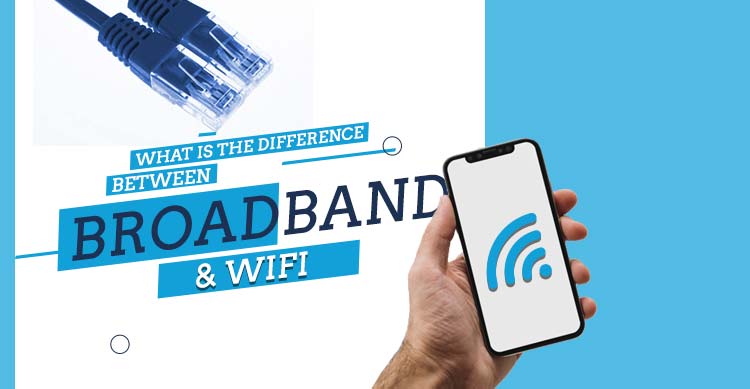 Internet has come a long way since the last few years, changing the digital landscape and transforming it in the process.

Of course, the argument as to whether the digital companies owe their very survival to broadband or to WiFi is an open question for not many are aware of the key differences between both.

If you thought that both are one and the same, you could not be more wrong, here’s why.

Internet was available to all through dial-ups and modems, but thanks to various advances, customers can now access sites at a higher speed, upload or download large packets of data, thanks to broadband.

But with the advent of broadband, ADSL broadband, cable broadband, but a little later on, companies have started offering WiFi which can match most of what broadband has to offer.

In case, you are still confused as to the key differences between the two, then you need to read on.

Before you can spot out the differences between both, you should know that WiFi is a wireless LAN technology that enables you to access the net.

The downside is that it operates over open spectrum at low ranges which means that you need to stay either in the same room or nearby to use the WiFi.

A few companies have even started boosting their WiFi signal so that customers can access the same over wider area. Broadband is also wireless, where you would be able to access your broadband connection through your phone or with broadband cable.

The other down-side to WiFi is that it is often subject to interference which is not the case with broadband.

Broadband enables you to connect online at high speeds; it comes with various options from ADSL, to cable that you can access at any time and also comes with a connection that is never switched off.

It should be pointed out that while the terminology of broadband is not all that surprising, not many are aware of the fact that broad band’s opposite term, narrow band has been used for dial-ups and modems alike.

There are various advantages to both, which you may want to take a closer look at.

But before that, you may want to know that WiFi essentially uses radio technology and is therefore subject to interference in case of severe solar storm, for example.

What’s more, with WiFi is, you should be able to connect more than one device to the network, and once the WiFi is on, it should start emitting frequencies between 2.4 GHz and 5 GHz.

What has helped to make WiFi popular is the fact that it is compatible with almost all operating systems and just about anything else.

Just remember that if you are connecting online using WiFi, then you would be sharing the connection with many, and the speed may be limited depending on the strength of the signal.

Advantages and differences between Broadband and WiFi

When it comes to broadband and WiFi, it can get a tad confusing and that’s an understatement with more acronyms clouding the digital space than you can shake a stick at.

The fact is that even your local smart phone enables you to connect online with at least three methods, and all you need is to enable your laptop to one of these and you should be able to connect online.

WiFi is where telecom companies can provide you with WiFi access to your system by providing you with a modem and a router.

Once the device is switched on, you should be able to connect online as long as you stay in the same room or within 75 meters of the device,whereas with Broadband, you can count on a secure connection and stay connected for as long as you like.

As you can see, here are some of the pros and cons of a broadband connection and a WiFi and the cost for the same, can vary from one provider to another.

While you can use the hot spot and surf with your WiFi, the fact remains that WiFi lines are not that secure whereas broadband is, all the way.

Since the advent of smart phones and 4G, you can now connect online using the phone’s WiFi signal or use its broadband connection.

While there is not much difference between the WiFi Signal on your phone or its broadband connection, as both are dependent on the data package you subscribed with your operator, the fact remains that both are unique and use various methods to help you connect online.

And while it may not be possible for you to connect several devices with a secured and wired broadband connection, you should still be able to do so with your smart phone.

As regards the method, all you would have to do is to head over to the settings on the phone and check for internet and connections.

Now, click on the same and you should soon be able to access various options, from WiFi to broadband which you can then access with the help of mobile hot spot.

But in case the terms wireless and broadband are still a tad mystifying, here’s the breakdown – a wireless connection is one that utilizes radio frequencies to help you stay connected.

On the other hand, a broadband connection is one that offers you high speed data connectivity, without using radio frequencies and one that offers you both wired and wireless, which is what makes it all the more confusing as it is getting harder to tell the two apart, especially for the lay person.

With more telecom operators getting into the play, it seems that more companies are now offering bundled routers and modems with their broadband connection.

Additionally they are also offering wireless routers which mean that you do not have to stay physically connected to the router in order to access internet.

Thanks to this, you can count on high speed broadband connection and move about, in close proximity as you access the same.

Of the two, WiFi certainly sounds much better for the simple reason that you can connect multiple devices to the same connection.

This is not possible with a secured broadband connection but on the other hand, it should be pointed out that WiFi’s are not secure and in more ways than one.

What’s more, with a broad band connection, you should be able to access vast amounts of data, send over similar amounts with ease than you could do with your WiFi connection.

This is why broadband connection remains a hot favorite with many.