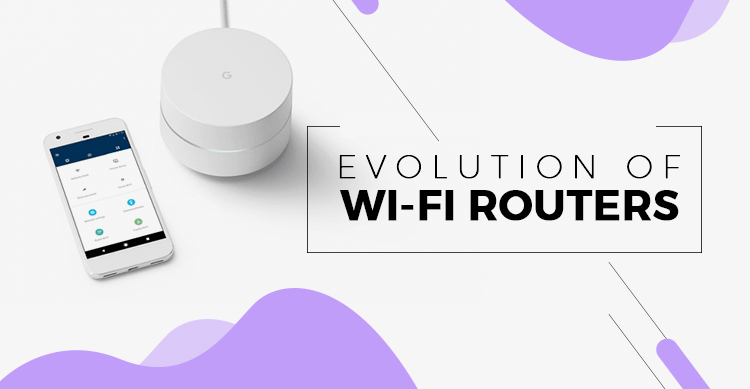 With almost every house now having a broadband connection, evolution of wifi routers are popular than ever. As you might know, most devices on the market such as smartphones and computers are equipped to use WiFi.

Though Wi-Fi has become an integral part our routine, most of us do not know much about the WiFi technology. Read on to know more about the historical evolution of WiFi Routers.

The history of evolution of wifi routers was fascinating and an earlier form of wifi was in existence since 1971. Apparently, “ALOHA Net” accounted for connecting the Hawaiian Islands with aid from a wireless network asset.

ALOHA Net and ALOHA protocol are the early forerunners to the concept of Ethernet which later transcends to the IEEE 802.11 internet protocols.

In the year 1985, US Federal Communications Commission accounted for the release of ISM bands. These ISM Bands were meant for unlicensed use and can be envisioned as the frequencies originating in the 2.4GHz band.

These are the same bands using in microwave ovens. At the same time, these bands are also subject to interference.

Later in the year 1991, NCR Corporation collaborated with AT&T Corporation which led to the invention of the precursor to the 802.11 module, which was designed to be used in cashier systems.

The first kind of wireless products was available in the market under the label of Wave-LAN, which was eventually accredited with the invention of WiFi technology.

An Australian radio astronomer John O’Sullivan along with his colleague Terence Percival and Graham Daniels played a significant role in the development of an essential patent, which was designated to be used in the Wi-Fi technology as a by-product.

However, this venture was a failure since the modification would smear the signal, leading to eventual breakdown.

In the year 1992 and 1996, CSIRO was successful at obtaining patents that would allow for a method to be used in the WiFi enabling the module to avoid smearing of the signal.

Eventually, in the year 1997, the first version of the 802.11 protocol was successfully released. This version was later updated in the year 1999 to the 802.11b module, which became immensely popular.

The WiFi Brand and Trademark at a glance

In the year 1999, the WiFi Alliance, which was formed as a form of the trade association, supposedly held the WiFi trademark. Many products associated with the WiFi technology were sold under this trademark.

The commercial use of WiFi as a name was featured back in early August of 1999. It was among the first instance that this name made a commercial appearance after being framed by a brand consultation firm “Inter-Brand.”

The company “Inter-Brand” was hired by the WiFi Alliance to frame a constructive name, which would appeal to the public and at the same time be easier than “IEEE 802.11b Direct Sequence.”

It has been stated by Phil Belanger (founding member of the WiFi Alliance) that the company invented the name as a “pun.”

It was referring to the word “hifi” but somehow seemed catchier the other way around. The same company was later accredited with the design of the WiFi logo which has been persistent till date.

WiFi, which by some unconfirmed accounts stands for wireless fidelity, has changed the way computers and many other electronic devices work together. With it, anyone can create a wireless network in a home or business easily and at a relatively small cost.

While 802.11 is known to be the standard specification for a WiFi network, it has been subcategorized under several subtypes, which highlight its quality of security and service. As seen earlier, each subcategory is represented by an alphabet in small case, which follows the designation 802.11.

While the first one provided a data speed of just 2Mbps, there was a need of more practicality for processing data via this network protocol. Here are the subclasses for 802.11 standard that originated with better features.

11b: It carries the signals via a frequency band of 2.4Ghz. With the highest bandwidth of 11MBps, this one is the slowest of all these listed standards. It has also been known for showing high susceptibility when interfered. It does have a longer range compared to 802.11a.

11a: This one has more speed compared to the b Wi-Fi standard, with speeds reaching 54Mbps. It shows less sensitivity to interference from other appliances and wireless devices. But, it has a shorter range compared to b. This weakness of short range made it costly, as it had to be installed with multiple access points to cover maximum distance.

11g: This one emerged as a hybrid standard that contained the top-rated features of a and b. Despite a large bandwidth and good speed, it still faced interference from other appliances.

11n: This standard is presently used around the world, which evolved in terms of wireless antennas and signals. With its Multiple-input/Multiple-output technology (MIMO) it has a capacity of transferring data at speeds of maximum 450Mbps. It even has a better bandwidth (2.4Ghz and 5Ghz) and limited interferences.

The 802.11ac is highly sought after because it holds the capability of accessing the 5GHz band, but it has been outdated. The 802.11ad variant, however, takes internet connectivity to the next level. It is capable of accessing the 60GHz band.

The frequency that has been mentioned above is a significantly high frequency. This feature also means that the range ought to get shorter.

Probably the effective range of the WiFi at the end of all would be limited to just one room. On the contrary, the 802.11 ad variant is capable of providing speeds within the range of 7Gbps.

The speed of 7Gbps is referred to as the uniform speed, which the WiFi is capable of producing without inducing much of a strain on the optical fibers.

In simpler words, the rate being referred to would be the lowest available on this variant. Provided with the right circumstances, the 802.11ad will be capable of reaching higher internet speeds as well.

At present, there is not any assurance concerning how the 802.11ad would be used in the market. It is also uncertain whether or not this variant will be available for commercial use.

There are several predictions, which refer to the fact that this enhancement in the technology would possibly replace several hardware constructions of the internet technology.

It would mean that the entire internet infrastructure of the future would be wireless and devoid of any physical associations that we may see as of now.

The other forms of prediction refer to the fact that phones might start making use of the 802.11ad WiFi compatibility to provide mobile internet connectivity with a significant boost. The exact purpose of 802.11ad is still uncertain and remains subject to speculations over the time.

802.11ax is a variant, which mainly focuses on the advanced features including MU-MIMO and enhanced life sustainability. It also highlights advancements such as Bluetooth 5.0 technology and infrared connectivity.

The dominant feature that is lacking in this variant is the improved speed. However, it was later noted for its top speed of 11Gbps at the CES 2018.

The 802.11ax isn’t capable of the massive speed generated by the 802.11ad, but it is capable of providing much better internet connectivity and speed when compared to the 802.11ac variant.

This WiFi technology has been built to suit smart devices which are being used by the conventional people on a regular basis. It is widely expected that this form of connectivity would ensure natural management on a global scale. This standard is also expected to make its market appearance in 2019.