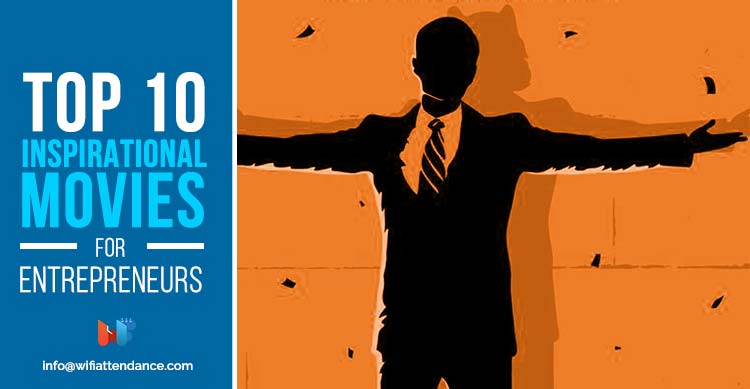 Fresh research work and innovative ideas are reachable these days with social media and overall online world. However, entrepreneurs can find inspiration from movies as well.

A great movie can change your perspective and stimulate your brain to find innovative ideas, obtain a vision and follow it till you achieve. You just need to be a little selective with what you watch. There is a tsunami of movies out there. But you can’t watch all of them.

Here, in this article, you will find a list of 10 movies that will inspire you again and again as an entrepreneur.

The struggle of a salesman depicted by the jolt of talent Will Smith, this movie will give you an internal power to chase your dreams as an entrepreneur. The story is about Chris Gardner, who has no job, no money, no house, and no wife.

He and his kid have to live in shelters or even in the toilets of subways. The story shares the personal struggle of Chris Gardner and his smart moves to beat others and win a livelihood for himself and his kid.

Humans have lived in the forests, then, created villages, which turned into cities. But now, we all live in the online world. But how it all started?! This movie shares the story of Facebook founder, Mark Zuckerberg.

The movie shows the early days of his life at Harvard and how he created a startup for fun, but soon became competitive about it. And that competitive spirit turned Facebook into a multi-national billion dollar company.

This classic shares the story of how Bill Gates and Steve Jobs started their empires during the 80s. The story highlights the genius of both the giants, but it also goes into the rivalry and triumphs of these two founding fathers in the tech world.

The story teaches the importance of being ahead in the market. But at the same time, you learn to not let yourself down if someone steals your idea. In the world of business and entrepreneurship, implementation decides the success, not the idea.

Wherever you are in life, it is all because of your own hard work, humility, and patience. The world doesn’t owe you anything. This is what you learn from the life story of Joy Mangano, who is an entrepreneur played by Jennifer Lawrence.

Joy invented Miracle Mop as well as the Huggable Hangers. But her inventions went through an intense level of personal and professional struggles. The story shows how she overcomes her struggles and creates 100+ inventions to promote via Home Shopping Network to earn millions.

If you are a women entrepreneur, this should be the first movie on your list. The movie deeply explores the struggle of being a businesswoman.

The world of wall street understands the language of bucks and bucks only! The rest is nothing but worthless conversation. The dialogues from this movie have become classics among entrepreneurs and investors. The story revolves around a young, ambitious stockbroker named Bud Fox.

He is ready to do everything to succeed. But he comes across a situation when he is supposed to help with something that is illegal and morally wrong. This movie explains why entrepreneurship is beyond getting famous and rich. You can’t sell your morals and expect to survive in the long run.

With a blend of drama and comedy, this movie is set in the market environment of middle 2000s. Some finance experts begin to notice the hidden instability in America’s housing market.

They predict a collapse. They go deep and realize how corruption and flaws in the market ruin a flourishing industry.

The writing and the performance of actors such as Christian Bale, Brad Pitt, Ryan Gosling, Steve Carell, and Finn Wittrock make this movie a treat to watch for entrepreneurs. The drama is presented with a splash of comedy, which keeps you excited till the end.

The movie will teach you how important it is to see the core of any opportunity. You can’t blindly follow everyone towards something, which you believe will fail in future.

People might call you mad and won’t believe your vision, but that doesn’t make you wrong all the time. It is all about an in-depth evaluation and assessment to feel confident about your predictions.

A moral dilemma is in front of you every now and then. Entrepreneurs have to fight it many times in their life and career. And that is what this movie shows from the life of a college dropout. Seth Davis is only 19 and he obtains a big position among top brokers.

But the firm, he is working at, seems suspicious. Now, it is up to him to decide whether he chooses legality and morals or follows the path of greed and money.

This movie is a correct depiction of how entrepreneurs have to choose between a right and a wrong thing in their business. And that choice decides the fate!

This one is a drama-packed movie about success, fortune, fame, law, and greed. One of the greatest performances from Leonardo Di Caprio takes the movie to a whole new level of excellence. You will learn to stop making excuses to yourself and just go for what you want in life.

At the same time, the movie will also help you realize how easily you can lose your success if greed, power, women, drugs and other temptations start interrupting your thoughts.

Played a Bradley Cooper, this is a movie about a writer who is struggling in his life. There is no present or future life for him. But he suddenly finds a unique pill, which increases his mental abilities to 100 percent. The drugs allow him to rise in the world of finance, but the side-effects become unbearable to handle.

This thrilling movie is a metaphorical depiction of how easy solutions can have harsh consequences. In the movie, the character Eddie overcomes that, but life isn’t so generous all the time.

Professional football, gambling, and Vegas, these three words should be enough to make you excited about this movie. Things go out of control, but the actors McConaughey and Pacino show how a new change is possible for the determined people in the world of business.

Read Also: Top 20 Parental Control Routers to Use in 2019

So, which motivating movie has made it to your personal list?!