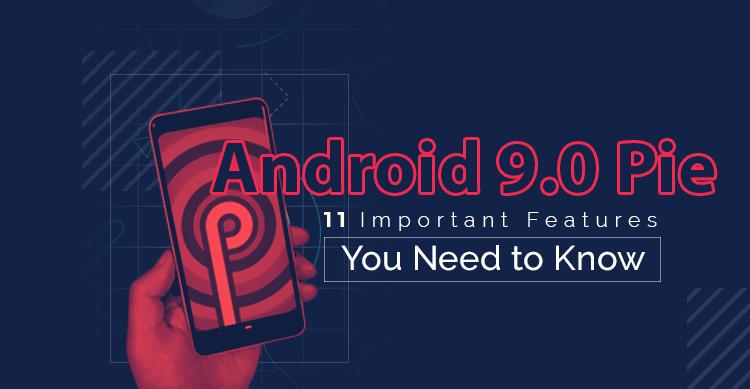 The beta has finally evolved into the Alpha of the league. The Android 9.0 Pie is ready to be served ! But! Only Pixel users for now!

Google has decided to serve the very first slice of the pie to their own family. Pixel users will be the first ones to enjoy the delicious features the OS has to offer!

Google arranged a developer’s preview launch to evaluate the pie a few days earlier in its beta form.

Smartphone giants like Xiaomi , Sony, Oppo, Essential, and more a who participated in this trial launch might get lucky in the fall of 2018.

For those who did not make it in this list, no worries. The pie shall make it up to you anytime this year.

The navigation keys at the base of the screen are fused to form one capsule icon at the centre. Long pressing the key, wakes up your Google assistant.

One swipe up gets you to the last app you were using. A parallel swipe gets you the tabs of all open apps. One  Tap and back home!

This could get a little tricky at the start. But the truth is, the current interface is much smoother than before. But if you continue to find it difficult, android has taken care to not disappoint their users. Go back to settings and change bsck to the 3 button layout as you please.

The capsule has a gesture recognition feature which can be set if desired.  The movement of the capsule helps the user to swap through the apps screens.

3. Rotation button will now come to you

Rotation when turned off to prevent uncalled screen swivels is tedious to reverse. The new feature calls for the rotation button to pop up on the screen when the user tilts the phone. It is easy to switch the screen view as and when you desire.

4. It is top Notch! Pun intended

Apple blazed the trail and the rest of the OEMs followed.  Notches were introduced to expand the display till the edge eliminating the bezel.

The notch is a necessary attribute to the apple phones but to Android it is just another upgrade to groom the appearance.

Android Pie provides users with the option to customize the size of screen cut-outs.

The new adaptive battery studies the patterns of the user in terms of the apps. You can view this as the baby steps in machine learning technology.  The battery directs more power to the apps which the user prefers to use frequently by simply limiting the supply to those apps that are less used.

With the beta program trial of the OS, the users reported 20 % increase in battery life.

Another factor responsible for draining power is the brightness. It has been taken care of as well. Evaluation of manual adjustments will slowly lead to automatic tweaks in the brightness as the user desires it to be in varied situations.

This was made possible by the Deep mind team whom Google approached to decipher the cerebral makeup of smartphone users.

As things get easier, humans get lazier!  How many times have you read a text from your mom and just ignored it owing to the mundane nature of the replies?

But what if your OS does it for you? And that too without opening the app?

Android pie got us the new smart reply feature directly through the notification panel.

App action feature sends a suggestion in your app drawer. The app itself generates the suggestion based on the user’s habits of using that particular app.

For instance, a user consistently reads flipboard articles at 8 pm. Flipboard will appear in the suggestions and is accessible with a single touch.

8. A major breakthrough with Wi-Fi integration

Android pie has assured to supplement WiFi Round-Trip-Time. In simple words it is an in-building GPS feature for the phone.  Also known as indoor positioning, this feature allows the apps to measure the distance between WiFi access points. It is not necessary that the phone be connected to the WiFi in the building.

The apps will deploy the information to fabricate surreal experiences. In building navigation, voice control for IoT devices and location based information are a few to be mentioned.

How cool would it be to Switch on the AC of your room while you still in the lobby of your residential complex?

To find the stores in a mall with crazy discount sales?

Indoor navigation would speed the game for android to the next level.  And android P is the chosen one by WiFi RTT to launch this incredible new feature.

Google has planned to squeeze in the power of its search engine trademark traits in the OS.

Project your mind to Google search. Remember at times when Google displays bits of information directly while you type in the search box?

Exactly that will now happen with the apps. They call it Slices.

Predicting your search, the apps will give you more than just the search query. It will display an extra slice of the information to ease the process.

10. What more could Google possibly do to make you fall in love with Android?

How about a gesture of care for your well being?

Still in the beta testing phase but would be up and rolling soon. The digital well-being feature has all the qualities of a digital caretaker.

The phone will now tell you how much time you have been glued on to it. All on the Dashboard!

You can set constraints on the usage of certain apps using App Timer .

DnD will be smarter than ever and hush all the alerts.

Wind Down integrates the DnD feature and marks the onset of grayscale implying – off to bed!

The Anti  Addiction Features will only be launched in the autumn crop of pixel phones.

Only a matter of time until a Smartphone user sees a whole new world, with one bite of the pie.

The ideal approach to portray Android 9.0 Pie in three words.