6 Ways To Deal With Political Talk In The Office

6 Ways To Deal With Political Talk In The Office 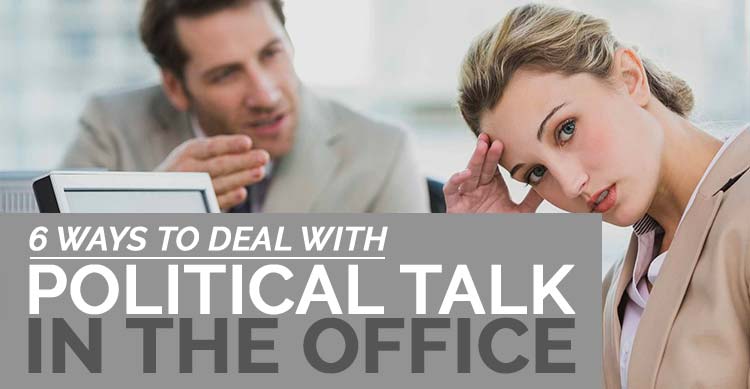 One would think that the office would remain free from the rough and tumble of politics and one could almost be forgiven for thinking along these lines.

The reality is quite different, you are bound to come across politics more often in the office than you would, say during a friendly get together.

The fact remains that you head over to your office, 5 days a week and no one to date, has managed to avoid any political talk in an office setting. So what do you do when you encounter such heated discussions in your office?

For example, the last US election which was also one of the most polarizing ones to beset that nation managed to divide husband and wife, son and father, and even made its impact felt in the boardroom.

It becomes vital to know what to do, when you come across any such political decisions and remember, that people can get quite animated when discussing politics and that’s all the more reason for why political discussions should be actively discouraged in any office as it can change and alter your focus.

While the common consensus has always been to avoid talking about politics or for that matter religion, it can be a tad difficult to ensure that your office remains sacrosanct, especially if there happens to be some breaking news, related to either one or both.

In such situations, you are bound to come across such lively discussions right here in the office.

For example, if your colleague asks you what you think of X or Y, you can always come back with a non committal reply.

If you are asked for your opinion on a political matter, you can always respond saying that you need more time to come out with a firm response since you have just heard the news.

The point is that you do not exacerbate the situation any further, and by being diplomatic, you are avoiding any unnecessary arguments and in the same line of vein, you are ensuring that the current discussion soon dies down.

You may be under the assumption that it is safe to hold discussions with those who agree with you but if history is any indication, you would know by now that the above statement is not true.

Either way, a little diplomacy goes a long way to retain the peace at the office and in the process, ensure that the focus is directed towards the project at hand, rather than a political debate.

When it comes to avoiding political discussions at the office, the one thing that you need to do is to avoid conforming.

Granted that’s easier said than done and you are more likely to conform to those around you; chalk it up to human nature.

But when you conform to your colleagues’ political opinion, you are just encouraging them to continue with more discussions on politics.

But keep in mind that the more such discussions you are involved in, the less you end up getting done at the office.

Chances are that your job satisfaction is going to take a beating as well as your overall performance.

What’s more, these political discussions can often prove to be too distracting so much so that you may find it harder to concentrate on simple matters which are why it is always better not to conform to the opinion of others, just for the sake of agreeing with the prevailing political opinion and instead focus on your work at hand. 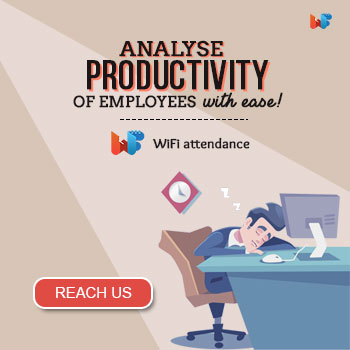 Granted that you cannot avoid political discussions with others but in the long run, it is always better for your work and for the concerned office, to seek out some commonality.

For example, you may find that you may have more in common with George from accounting – both of you may feel that humans need to do more to avoid climate change.

So, if George or someone else should initiate a political discussion, you can always guide it along to another topic and in this case, climate change.

This can help you avoid political discussions at the office and direct you towards a more meaningful conversation. By discussing the common issues affecting you both, you are able to guide the conversation into something that’s productive.

One of the reasons that people often indulge in political discussions is that they are always under the impression that they can change the minds of all those who disagree with them.

That’s easier said than done for it is not that easy to change the political affiliations of others or get them to change their minds, based on a single discussion.

This is also one of the reasons why most political discussions are always heated, and people have been known to even come to blows for the same.

Simply put, there’s extremely little you can get out of the discussion and instead of needlessly extending the political discussion; you need to accept that others have a right to their opinion, and then walk away from it.

It may surprise you to know that if you ask others permission as to whether it is okay to dissent with them and their views on any topic, they are almost always going to say “ok”.

Psychologists all over the world have used this tactic to good measure and it works wonders in any conflict-ridden situation.

So if you are dragged into a political discussion at the office and you hold a differing point of view, then you may want to ask the other person as to whether it is okay for you to dissent with their views.

And once you get the affirmative, just state your position and that you respectfully disagree with their views and walk away from the discussion at hand. This should help nip the political discussion in the bud.

This can be a little harder than most of the other points listed above, depending on how heated the discussion is getting.

For example, the UK referendum on Brexit, or Prime Minister May’s Brexit vote caused heartburn for many rights across the UK.

Brexit often featured prominently in political discussions at offices in the UK just as Donald Trump’s policies did at various offices across the US.

The point is that when it comes to important news or breaking news, discussions cannot be avoided forever at the office.

Chances are someone or the other would want to discuss the same, and given the situation, you may just want to go ahead with it.

But if the discussion is becoming too heated with tempers flaring wide, then you may want to come up with some excuse to walk away from it and in the process, preserve your own sanity. If that fails, then you are left with no option but to change the topic.

But before you can do that, you need to ensure that you are able to calm the waters by validating the person/s that you are having a discussion with.

Just tell them that you think that their views are important enough (irrespective of whether you agree or disagree with them), validate the same, and then tell them that the current discussion is too important to be had in the office and that you all need to get into it in detail later on.

Or you could tell them, “ I think it took guts to put that on the table”, and then tell them that the discussion has to be shelved for now, since you would not be able to discuss it openly.

In other words, you are letting them know that their views are important and valued; now, you can use this gap to change the topic of discussion to something more sedate.

This is how you get to change the topic of conversation without stepping on anyone’s toes.

The points listed here should go a long way to helping you avoid political discussions at the office. You may not agree with the political views of others, and you may even want to contribute something to the discussion at hand but just keep in mind that both politics and religion are not meant to be discussed at the office.

Moreover, participating in such discussions at the office has the tendency to alter your focus and even your performance. Given this, it is better to avoid all political talk or discussions and focus more on your work.