How to Fix the Most Common WiFi Issues?

How to Fix the Most Common WiFi Issues? 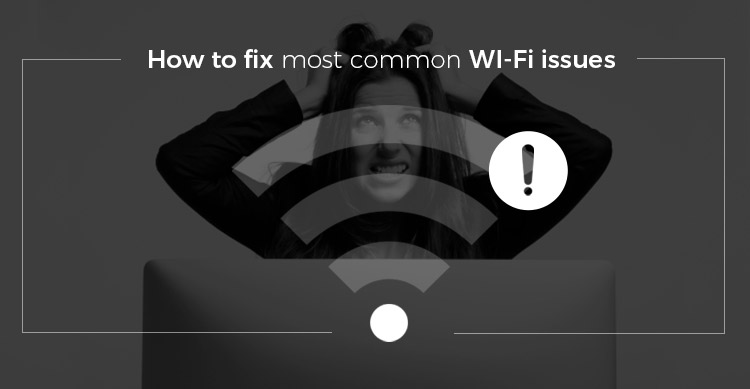 Wifi issues can be quiet disruptive if internet lies at the heart of your routine. You cannot access your email and browsers; movie streaming becomes a challenge; updates on social media take too long making you miss out on a lot, and your phones start to depend on data plans.

The reasons for an interruption in your Wi-Fi connection are plenty – the location of the router, firmware limitations, hardware issues, signal congestion, or just the size and vastness of your house.

Whatever it may be, slower internet speeds are not easy to handle and can really bother you at times, especially if you are trying to complete an important task at hand.

Here is a list of some of the most common Wifi issues along with suggested solutions to fix the same:

Internet speeds have drastically increased over the last few years. Despite such a tremendous improvement, some wireless and wired networks tend to get bogged down.

In case the problem persists, place your router at a height away from other obstructions and interfering devices. You can also try placing it in a central location of your home.

If your router’s firmware is not updated, you could be missing out on the advantages of certain features. Security issues might also be hampering the performance.

Suggested Solution – Visit the administration page of your router and check for any recommended updates. Review, download and install the same to enjoy additional features and improvements.

The step-by-step guide to upgrading your router’s firmware will be dependent on the make and model of the router. Take a look at the manufacturer’s website for more information and detailed directions.

Another common reason for Internet speed slowdowns is lack of bandwidth. When several members in the house are using the internet on different devices to access data-hungry applications, your otherwise fast internet connection spreads out thinly and is distributed across multiple devices.

Suggested Solution – Try and reduce the load by disconnecting devices that don’t require an internet connection. If the use of YouTube and Netflix is high, connect one of the devices directly to the router with the help of a Cat-5 ethernet cable.

This allows for some of the wireless bandwidth to be free. You must also check the data plan you have because if your internet speed from the backend is not enough to support such high use, you will always experience slowdowns.

Another important thing to check is the security of your internet connection. If you have an open network, chances that someone nearby is leeching off your bandwidth are high. Setup the security for your network and share your password only with a few.

Wireless technology has significantly evolved in the last one decade. Wireless standards have updated, internet speeds are faster, fiber is introduced in most areas, and the number of devices requiring an internet connection is higher.

Now, even your television, printer, smartphone, speakers, refrigerator, security systems, lights, and more are dependent on the internet. An outdated router cannot support all devices simultaneously.

Suggested Solution – If the internet speed is affected due to modem limitations, it is time for you to upgrade. It is recommended that you purchase a new router every two years as advancement in technology requires you to upgrade with the latest technology.

In certain situations, the router just stops communicating because of technical glitches. There isn’t a specific and distinct reason for the same.

Suggested Solution – Start by unplugging both the router and modem. Disconnect power and wait for around 30 seconds before you power it again.

Sometimes the internet connection drops completely, not because of a hardware trouble but because of backend service interferences. There isn’t much to explain and do in such a scenario because it just happens.

Suggested Solution – Visit a coffee shop to use their internet services or use your phone’s hotspot connection. Meanwhile, connect with the team at your Internet Service Provider’s end and inform them about the outage so that they can fix it.

Unfortunately, calling the ISP won’t give you instant internet speed and recovery but they will at least be informed of the affected areas and take relevant actions.

Most professionals today are extremely dependent on WiFi services and internet speeds must be fast. If the fixes mentioned above do not help, contact a technician and take their guidance to fix slow internet connections.

Previous How to Connect Laptop to WiFi – Three Simple Steps
Next How Will WiFi Networks Influence Smart City Development ?