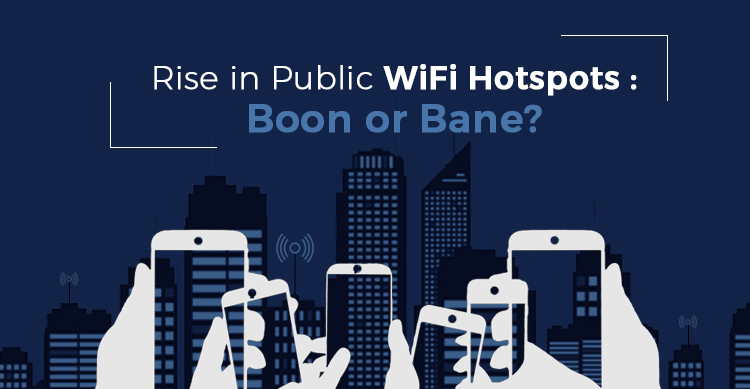 A public WiFi hotspot is a network that everyone from the general public has access to. Users can use it to connect to other networks or the Internet.

A public network does not necessarily have restrictions and therefore one of the significant factors opposing its use is the security risks involved with it.

Public WiFi is extremely vulnerable to intercepts by hackers. Only if it is used with a virtual private network is its security guaranteed.

WiFi hotspots are also secure if they have been upgraded to the WiFi Protected Access (WPA3) standard. This upgrade requires the buying and installation of new routers.

While these concerns are of immense importance, they cannot contradict the truth that public WiFi hotspots help to speed up the cause of creating a digitally advanced country – Digital India. There are several benefits that people can reap from the rise in public Wi-Fi hotspots.

To begin with, people struggle with the challenges of call drops. They experience 2G internet speeds even after having 3G and 4G connections.

Public WiFi hotspots are capable of addressing this issue. When WiFi infrastructure is shared, it offloads the traffic otherwise loaded on WiFi networks.

This reduces network congestion on mobile networks, especially in areas of high footfall. As the spectrum is freed from other loads of WiFi connectivity, the quality of calls starts to improve and congestion issues reduce.

In developed countries like the UK, France, and the US, approximately 30% of data usage is passed on to public Wi-Fi networks, as compared to a mere 16% in India.

According to the Analysis Mason report, commissioned by Google, a rise in public WiFi hotspots in India will help 600 million people to get access to WiFi networks.

For successful WiFi infrastructure, more than 3 million access points need to be set up in the entire country across tier-3 cities and villages.

With faster internet speeds, passengers will be able to utilize their time better, which in turn is beneficial for the venue owners (particularly railway stations and airports).

The deployment and utilization of public Wi-Fi hotspots can be cheaper in comparison to 3G and 4G networks. This is true in areas where fiber access to backhaul already exists.

Public Wi-Fi hotspots are a great opportunity for government institutions. This is because they can transform the area into a smart city.

Governments can improve their efficiency and empower the citizens with better services. Access to e-governance and electronic delivery of services such as Aadhar also gets boosted with the deployment of public Wi-Fi hotspots.

Tourism is also greatly impacted as a result of public WiFi access. When traveling, tourists like to stay in touch with their family and friends.

They like to access the internet for suggestions on sight-seeing, maps, and also sharing holiday pictures on their social networks. Tourists are more attracted to visit a destination that offers free internet services on-the-go.

Is the rise in public WiFi hotspots a boon for the country?

These advantages as solutions to congestion issues do not nullify the security concerns surrounding public WiFi. A report published by Symantec last year (2017) states that 96 percent of Indians are prone to the risks of data theft and other cyber crimes as they use public WiFi for accessing bank accounts and sending important media.

Cybercriminals aggressively target unsecured WiFi networks. The study also concluded that around one-third of the users in India accessed public WiFi for the purpose of watching explicit content.

Another interesting finding of the study stated that half of the Indian users connected to WiFi networks without the consent of the network’s owner.

These factors pose a huge risk to users. Nevertheless, many countries across the globe are installing public WiFi networks with the focus on securing them even more.

The number of WiFi users across the globe has crossed 9 billion and their protection over WiFi has become extremely crucial. This can only happen when the wireless security protocol is upgraded even further.

But keeping users away from the benefits of public WiFi hotspots in the name of poor security is not a good idea.

Previous How Will WiFi Networks Influence Smart City Development ?
Next How to Set Up WiFi at Home : 5 Easy Steps