What Is The Difference Between The Bluetooth And WiFi

What Is The Difference Between The Bluetooth And WiFi 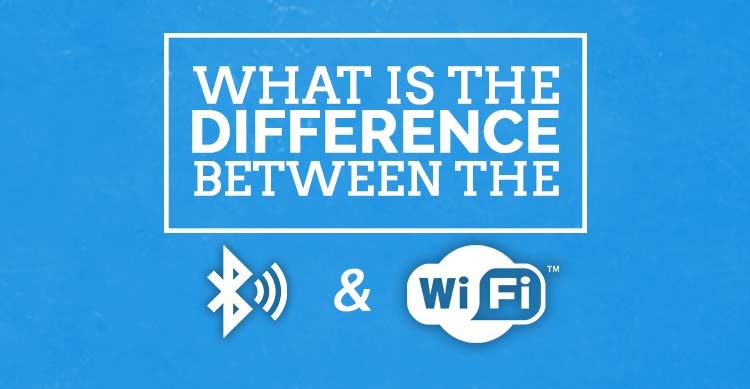 WiFi and Bluetooth are two modes of wireless communication. Both modes utilize radio signals to establish connection. But there is a core difference between these two with respect to the purpose they serve.

Bluetooth allows connection in a short range between devices. This helps in sharing data between the connected devices.

On the contrary, WiFi enables access to the internet.

Bluetooth is limited to the devices connected in a short range. But there is a higher connection possibility for WiFi users.

The bandwidth also changes between the two modes. WiFi offers higher speed due to high bandwidth, while Bluetooth connection works on low bandwidth.

Read Also: What Is The Difference Between Broadband And WiFi

IBM, Nokia, Toshiba, and Ericsson are the companies that invented Bluetooth. However, it was Intel that created SIG or Special Internet Group to promote the concept of Bluetooth.

They also developed Wireless Personal Area Network or WPAN. With that, Bluetooth became the very first technology for short-distance wireless network for data application and communication.

The rate of data is pretty low with respect to WiFi. But it offers an inexpensive way of creating a small but effective wireless network.

2. What is the architecture of Bluetooth?

The topology of Bluetooth is called the scattered kind of ad-hoc topology. This topology defines the collection of connected devices in an ad-hoc way. This collection is called Piconet.

There are total 4 states of Bluetooth connection:

3. How is a physical connection developed to use Bluetooth?

To create a physical connection, a modem with FHSS type is used. FHSS or Frequency Hopping Spread Spectrum modem is leveraged along with 0 dBm of antenna power. Alternatively, 20 dBm can be used for the operation as well.

The hopping rate of Bluetooth should be 1600 hops/second. Bluetooth can attain a specific hopping format for every piconet, which is known as its frequency.

4. How to manage a Bluetooth connection?

5. What about the security aspect of Bluetooth?

With Bluetooth, you can expect information confidentiality and usage security as well. The utilization of a random number, device’s MAC address ensures its security.

The two-step approach, Authentication, and Encryption, further enhances the security. However, there are three ways of Bluetooth operations, which are non-secure, link level and service level.

Read Also: What Is LiFi? All You Need to Know

Wi-Fi is also called Wireless Fidelity. This technical name is IEEE 802.11 suite. This standard was the initial WLANs standard. These same standards create an interface that ensures transmission and receiving process between multiple wireless clients and access point.

With 802.11 standards, inventors wanted to increase the range of wireless connectivity. Making portable, permanent and mobile connections, these standards lead to the development of much-needed PHY and MAC layer.

Features of IEEE 802.11 standard include:

2. What is the architecture of WiFi?

The topologies or operation models have two types:

3. What about WiFi’s security?

Read Also: WiFi Can Let You See Through Walls – Know How!

Bluetooth bandwidth stays low, while WiFi works with high bandwidth. This is due to the range of network and the limitations associated with the connected devices.

In terms of required hardware, both types require their own adapter availability. However, WiFi needs one wireless router as well.

When it comes to usability, Bluetooth network seems pretty simple. The connection is small, which allows users to easily switch from one device to another for a new connection.

The process of using WiFi is a bit complicated with respect to Bluetooth. First of all, it requires the correct installation and configuration of router. The software configuration also takes complex steps. Only then, the complete setup establishes WiFi network connectivity.

When compared in terms of security, WiFi seems better than Bluetooth. WiFi offers better security features. Which is why Bluetooth seems less secure as compared to WiFi. However, there are security issues regarding the use of WiFi as well.

The energy consumption is pretty low in Bluetooth, which makes it easier to install in small devices as well. The WiFi network takes higher energy, as there is a router involved along with multiple network stations.

The frequency can range 2.400-2.483 GHz in a Bluetooth network. This range goes up to 2.4-5 GHz in WiFi. This frequency range is the reason why Wi-Fi enables better and more complex connections.

Bluetooth allows a certain number of devices to connect together in a short range. So, the user flexibility is pretty low in this type of network as compared to WiFi.

With WiFi, many users can get access to the network at once.

The modulation technique for Bluetooth is GFSK or Gaussian Frequency Shift Keying.

The modulation technique for WiFi network is OFDM or Orthogonal Frequency Division Multiplexing. It can also use another technique called QAM or Quadrature Amplitude Modulation.

Both WiFi and Bluetooth technologies have enabled users in terms of wireless communication. Multiple devices can connect with each other and share data. The purpose of both connection types is different, but they both have their own advantages.

While Bluetooth works fairly to connect devices in a short range, you need WiFi to get large connectivity to the internet.

With this knowledge, you can now utilize both kinds of wireless communications as per your need. You know the advantages, so choose a type of network that aligns with what you are trying to accomplish.

For instance, large connectivity for multiple users asks for WiFi. But you can connect two devices using Bluetooth for data transfer in a short range.